In all English translations, Genesis 3:16 says that “…Your desire will be for your husband, and he will rule over you.” The word that is  translated as “desire” in today’s English Bible is the Hebrew noun teshuqa. It’s meaning underwent a transformation over the centuries from “turning” in the Greek Septuagint to “desire” in today’s English translations. (Read more) This change of teshuqa can be traced to the Jewish Talmud by following the influence of Jewish scholars on Bible translators, notably Jerome.

The Rabbinical teaching  found in the Talmud and other Midrash was being formed and compiled only after the destruction of the temple in 70 CE. Originally, the Rabbis passed their teaching along orally . This oral tradition became the foundation of Jewish religious law, called the Mishnah. Rabbis continued to debate and make legal judgement from the Mishnah, and this commentary formed the Gemara. Together, the Mishnah and the Gemara form a Talmud. The most influential Talmud was the Babylonian Talmud. Scholars point to 200 CE as being the earliest  date for the first completed Talmud, but most point to a later date in the 4th century.

Many of our Christian “traditions” regarding the creation of humans are first found in the Talmud or the extended teachings on the Talmud (Midrash). It is in the Talmud that we first hear of Adam’s “rib” as opposed to his “side,” and we are taught that Eve was a temptress. Here we find much imaginative and explicit exposition about the sexuality between Adam and Eve…and yes, even the serpent. It is also here that we find that teshuqa has been re-defined as “urge,” and the battle of the sexes is born. The all-male Jewish rabbis filled volumes with their ideas about women and women’s behavior.

The depiction of the woman’s creation leads the Rabbis to inquire into gender differences and the nature of the female sex, all through the eyes of the male Rabbis. They discuss woman’s different temperament, her mental maturity, her habits, the physical shape of her body, her behavior, and other aspects of female existence. Tamar Kadari

It is only after the compilation of the Talmud that we see a different definition for teshuqa than “turning” in translations from the Hebrew. Jerome, arguably the most influential Bible translator on early English translators, spent 35 years studying alongside Jewish scholars, and his Bible , the Latin Vulgate, is known to display rabbinical influence in its translation. And we see it pop up in his translation of Genesis 3:16. “Thou shalt be under the power of a husband.” Centuries later, English translators followed course and the original meaning of teshuqa was lost.

Let’s back up a bit further.

During the 3rd and 2nd centuries BCE, seventy-two Jewish scholars convened in Alexandria to translate the Hebrew Scriptures into Koine Greek for the Alexandrian library. They translated teshuqa as “turning.” Jesus, his disciples, 1st century Rabbis, even Paul, all used the Septuagint as evidenced by its quotations throughout the New Testament. Genesis 3:16 said that “Eve’s turning was to her husband” in every Greek Scriptures, and other notable translations from that time.

Now understand, the Rabbis, called Sages at that time, were teaching all during the five hundred years from the translation of the Septuagint (132 BCE) until the Talmud was compiled in approximately the 3rd century CE. So, I’m sure their ideas of Eve’s teshuqa as desire was commonly taught in synagogues and academies. When they pulled out their Hebrew Torah, they could have expounded on teshuqa as desire. But, if they pulled out the most widely accepted Greek Scriptures, they would have read “turning.” 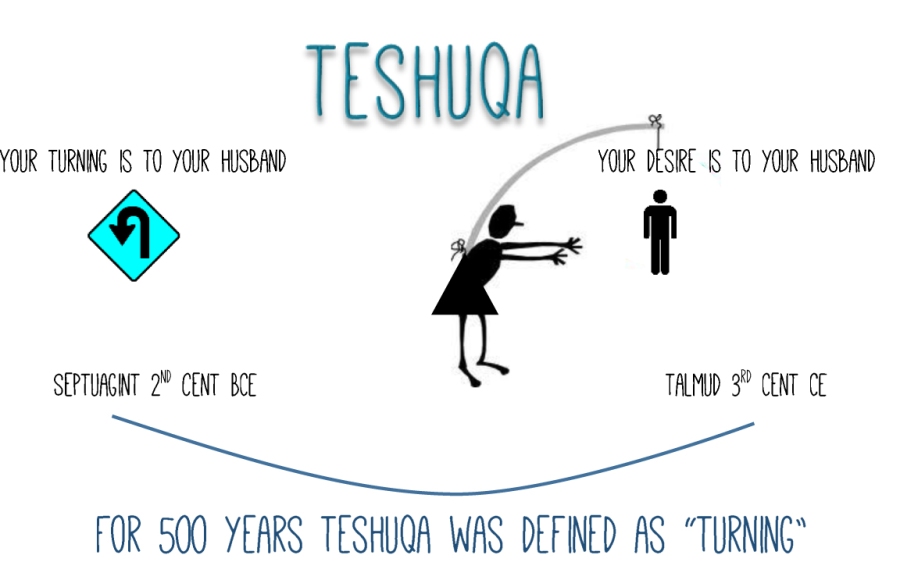 Where did the substitution with desire occur?

The Ten Curses of Eve

Additional points: “She grows hair like a Shed [Lilith]. She sits while urinating, like a mule. She is a pillow to her husband [she is underneath during relations].”

Inbar Raveh, in  Feminist Rereading of Rabbinic Literature (p 42-46), explains this midrash-teaching on the punishment of Eve as having two parts: biological and social. The social curses were designed to do the very thing God prophesied in Genesis 3:16: control  women. Eve’s teshuqa was recast as sexual desire and then harnessed with the words of Curse #6: “and he shall rule over you.” A woman will feel desire, but may not act on it. She is cursed to repressing her sexual desire to the man’s. To a man’s mind, there is nothing so punishing as resisting a sexual urge, right? The Curses of Eve were designed to control the most important aspect of women from a man’s point of view: her sexuality. And since Rabbis were all men, they had no correcting female voice to balance the veracity of their ideas of what Eve’s teshuqa really was.

Ironically, Raveh points out that there are many cracks in the Rabbi’s reasoning which might reveal the true motive behind the redefining of teshuqa to sexual lust; mainly, that “a woman’s desire for her husband is not, in fact, self-evident…Thus, in between the cracks of the midrash there seeps a pervasive anxiety concerning feminine ambivalence toward the heterosexual monogamous institution of marriage whose ultimate aim is childbirth.”(p. 46)  Could the transformation of teshuqa from “turning” to “desire” be nothing more than wishful thinking on the part of the all-male Jewish Rabbis?

Perhaps the Rabbis connected the dots back from childbirth to intercourse, and then assumed this was the intent of the word teshuqa? We get that impression from another midrash found in Genesis Rabbah, which is a verse by verse Jewish commentary on Genesis. In this portion on Genesis 3:16, a glimpse at teshuqa‘s original meaning is seen, indicating the original meaning of “turning” was not lost on the Jewish Rabbis. Notice too, the connection the woman in labor makes with the act that put her in such agony, and the Rabbi’s commentary taking the authority of God’s Voice in insisting her “desire” will “return.”

Another interpretation of “And thy desire shall be to thy husband”:

Who knows? This might be the passage that teshuqa‘s meaning crossed over once and for all into the land of desire?

The rabbinical understanding of women and the role of women is disturbing in parts of the Talmud. Their attitude is summed up in the notorious prayer of Jewish men thanking God for not making them a woman. Equally so, is Jerome’s outright scorn of anything female, which highly influenced the medieval church’s position on women. How heartbreaking that these men have defiled Eve’s teshuqa, transforming women into sexual effigies and creating centuries of misunderstanding and stigma and justification for male domination.

We cannot allow them the last word on Eve and her daughters. Instead, let us turn to the Great Rabbi, Jesus of Nazareth. When faced with the chance to scorn and judge woman’s sin, to exaggerate or berate her wrong choices, to expound upon the weakness of women and justify male dominance…  he simply says,