1 Timothy is a letter written to help Timothy navigate the mixed-up, idolatrous ideas that were wreaking havoc on the faith of the Christians in Ephesus. Read more about these problems in this article. In 1 Timothy 2:9-15, Paul placed extreme limitations on the women in the Ephesian church, because the women were especially causing problems. We read in chapter 5 that some women were not only disturbing the households of the church, but were demanding monetary support, and were implanting teaching that Paul calls “satanic” (5:15). In chapter 2, we deduce  the Ephesians were praying to the wrong god, with wrong ideas about posture, attitude and apparel. The refusal to learn (2:11), the dominating insistence of women (2:12), and the incorrect teaching about the creation order and fall (2:13-14) were all bound together in these women’s fear of dying in childbirth (2:15).

The false teaching that was propagated by the Ephesian women is a mystery until you place these thoughts in their historical and geographical context: Ephesus in the first century. In Ephesus,  the pervasive worship of Artemis swayed the church away from the true faith, and Paul’s words in 1 Timothy 2:9-15 reflect her influence.

In 1 Timothy, Artemis is not mentioned by name, but her dominating presence in Ephesus was pervasive, as Paul himself experienced in Acts 19, when a city-full of her worshipers spent two hours shouting “Great is Artemis of the Ephesians,” until commanded to disperse. Her temple was described by Pliny as four times as large as the Parthenon,[1] and housed a large idol believed to have “fallen from the sky (Acts 19:35).” She was worshiped by “all Asia and the world (Acts 19:27).” While the Ephesians believers embraced the gospel, “the author of the epistle seems to be combating mixed devotion to Jesus … and to Artemis, whom the converts could not yet abandon altogether.”[2] Many of Paul’s instructions “overlap with common teachings of the Artemis cult.”[3]

There are three distinctions of the Artemis of Ephesus cult that are relevant to 1 Timothy 2:9-15: celibacy, first born status, and midwifery protection.

Artemis was a virgin, served by young, prestigious maids of rank and eunuchs from Ephesian aristocracy.[4] Steven Baugh summarizes her persona neatly.

“The ancient Ephesians themselves presented Artemis Ephesia to the world as the traditional tomboy huntress who stood for chastity and the rejection of marriage.”[5]

In the Ephesian church, false teachers were banning marriage (4:3), which Paul condemned. Paul took a different stand on virgins in Ephesus than he did in Corinth (1 Cor. 7:25) where he encouraged singleness, indicating his instructions were culturally directed depending on the social and religious environment. Syncretism with the worship of Artemis might have caused this elevation of the celibate state in Ephesus. And since it was linked to the worship of Artemis, Paul denounced it.

Artemis was the first born twin.

It was popular belief that Artemis was the pre-eminent first born. Apollo, her twin, was subsequent.[6] This birth order gave Artemis dominance over her male twin. She was the big sister in charge. Consider Paul’s words in 1 Timothy 2:12-14 in light of the Artemis teaching.

12 I do not permit a woman to teach or to exercise authority over a man; rather, she is to remain quiet. 13 For Adam was formed first, then Eve; 14 and Adam was not deceived, but the woman was deceived and became a transgressor. 1 Timothy 2

Paul’s reference to the Genesis account of creation was to correct false myths concerning the superiority women claimed over men through Artemis.[7]  This false teaching would naturally be taught by the women who used Artemis’s supremacy to dominate the men of the church (2:12). Paul referenced Genesis, not as proof that women as second-formed are more easily deceived, but as a presentation of the facts without stating ramifications. In 2 Corinthians 11:3, Paul warned both men and women against being deceived, but in Ephesus, it most likely was the deception of the Artemis cult that especially enticed the women. The Genesis reference taught God as creator, Adam as first created; and refuted the very existence of the gods.

Artemis was the goddess of childbirth. 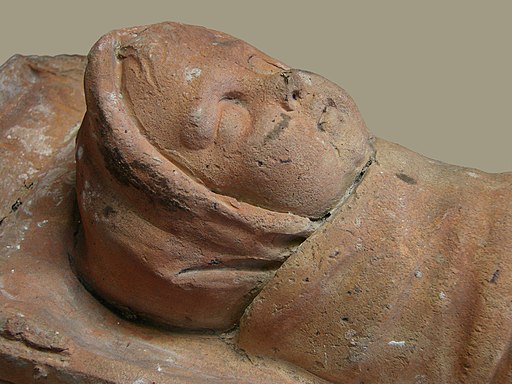 (By Vassil (Own work) [Public domain], via Wikimedia Commons)

Artemis was extremely popular throughout the ancient world because she promised to protect women in the most hazardous of all feminine endeavors. Childbirth. Modern readers cannot appreciate the tension of becoming a mother in previous times. The joy of bearing children was tempered by the terrifying fact that childbirth complications lowered the life expectancy of ancient women to 25-30 years of age.

Artemis promised to protect women in childbirth.[8] Although a virgin herself, she had great empathy for laboring women. According to Homer’s myth, Artemis witnessed her own mother, Leto, labor nine days to birth her twin brother, Apollo. As well as protecting women in childbirth, she also guarded the city of Ephesus.[10] Strabo says this is because it was her birthplace. When the temple of Artemis was burned to the ground the first time, Plutarch explained that Artemis was away at the birth of Alexander the Great, whose timing coincided with the inferno. When Artemis was present at her temple, Ephesus was invincible. She was painted as a sovereign ruler who was in control of who lived or died.

Artemis Savior, as she was titled, was petitioned for safe deliverance.[9] Women wore amulets to signal their devotion to Artemis. Mothers and fathers wrote letters to her temple asking for safety in child delivery. Women showed their gratitude to Artemis for a happy marriage or safe delivery by presenting the goddess with expensive garments.[11] The statue of Artemis was draped in lavish vestments, and the women petitioned her wearing their own finery.

Remember that 1 Timothy was written to correct false teaching with unified doctrine? Paul mentions salvation for the very thing the false goddess Artemis was famous for: childbirth.

15 Yet she will be saved through childbearing—if they continue in faith and love and holiness, with self-control. 1 Timothy 2

5 For there is one God, and there is one mediator between God and men, the man Christ Jesus… 9 likewise also [in prayer] that women should adorn themselves in respectable apparel, with modesty and self-control, not with braided hair and gold or pearls or costly attire, 10 but with what is proper for women who profess godliness—with good works. 1 Timothy 2

When we put 1 Timothy 2:9-15 into the context of combating the false worship of Artemis, we begin to understand Paul’s purpose for this passage. It is not to restrict all women, everywhere, forever. So what can we learn from 1 Timothy 2:9-15? Up next.

[2] Dr. Frank R. Ames, “Appendix One. The Ephesian Social World Providing the Backdrop for Paul’s Teaching in 1 Timothy,” in What’s With Paul and Women? Unlocking the Cultural Background to 1 Timothy 2, by Jon Zens (Lincoln: Ekklesia Press, 2010), 92.

[7] Glahn, “The First-Century Ephesian Artemis: Ramifications of Her identity,”463.

[9] Glahn, “The First-Century Ephesian Artemis: Ramifications of Her identity,”451.

2 thoughts on “Artemis worship instigated the restrictions of 1 Timothy 2:9-15”