In the last post, How do you see Genesis 1?, I challenged you to read the Genesis creation story and to take note of the visual picture that was forming in your mind. The purpose of this exercise was to point out the differences between a modern reader and an ancient one. A modern reader wants to see scientific explanations in Genesis 1 because that is our cognitive environment. An ancient reader imagined things quite differently. Because our cognitive environment is different than the original audience, we often miss (and sometimes misinterpret) the author’s intent.

The creation story in Genesis 1 was crafted to give its readers a message. It was not intended to describe the creation event as it actually happened. Karl Kutz writes that the creation account of Genesis is “heavily driven by literary concerns,” not scientific fact. (pg. 9, “Genesis 1:1-2:3 – Letting the Text Speak for Itself,” Cultural Encounters: A Journal for the Theology of Culture col. 13 no.1 (Winter 2017)) For instance, light is created prior to the objects that give us light. Plants are created before the sun to give them photogenic life. Evening and morning occur without the sun and moon to regulate those times. It is entirely possible that the actual creation event occurred in this way, but it is an error of the modern reader to expect the ancient author to be concerned with getting the scientific order correct. Instead of indicating actuality, the author of Genesis was working under his understanding of ancient cosmology to present his message that the God of Israel is the creator and controller of the entire world.

In this post and the next few posts, we will look at two ancient assumptions about the world, and how the Genesis account was written to refute these core assumptions, while leaving others unchallenged. The modern mind seeks to correlate the written story with verifiable knowledge, but that correlation does not motivate the Genesis account. Rather, it was written to distinguish the God of Israel as the Lord over the entire cosmos. God is the ultimate and supreme power over everything.

The ancients personalized the natural world into gods.

The idea of crafting a creation story was not original to Scripture. The ancient world had many creation stories. John Walton lists twenty ancient near-eastern manuscripts that gave creation accounts written in Sumerian, Akkadian, Egyptian, Hittite and Ugaritic. (pg. 35, Ancient Near Eastern Thought and the Old Testament) Understanding what was written and why these stories were written gives us insight into the cognitive environment of the ancient near-eastern audience that the Bible shared. We get a glimpse into their mind’s eye to see how they visualized and understood the world around them. It was quite different from our own.

There were no atheists in the ancient world. Quite the contrary, divine beings were used to explain every aspect of life, and all of life’s experiences were infused with religion. In today’s world, we seek to understand natural phenomena by utilizing the scientific method of theories, testing and recording data. In the ancient world, they sought to understand natural phenomena by anthropomorphizing nature into multiple gods and goddesses, mythologizing causation stories and ritualizing their effects. This turned the matter and workings of the natural world into persons and beings that the ancient mind visualized at work all around them.

In Mesopotamia and Egypt, the gods’ origins, functions and roles were the ancient’s explanation for the natural phenomena around them…why the sun rose and set, why the tide came and went, why it rained, etc. John Walton explains that a god was represented through their actions in nature. For instance, in Egyptian cosmology, “Nut was not so much the sky as what the sky did.” (Walton, 49) But even though they associated the gods with the actions of nature, they also imagined these gods quite literally in their mind’s eye. Here is a picture of Nut whose body is drawn as the sky, bent over the world, with stars embedded in her flesh. 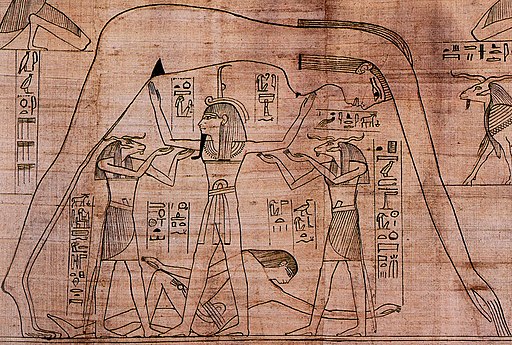 The gods and goddesses of the ancient world were given origins, adventures, families, and names that expounded on each god’s specific function reflected in nature. For the modern person seeking to understand the ancient assumptions about the gods, this is key. The gods made the unpredictable and chaotic forces of nature personal, and provided a way for the ancient person to petition and influence nature through their relationship with that god.

But if we stop with our understanding of this ancient mindset toward the personification of natural phenomena in the ancient world, we will overlook the greatest distinction that Genesis 1 re-orders in the ancient cosmology.

The gods were bound to an impersonal power that controlled them.

The key to understanding the polytheistic religions of the ancient near-eastern world is to understand that the gods were not the ultimate authority. Herbert Brichto says it this way. “Ultimate power is a force beyond them [the gods] , a force they may tap to achieve their ends, and which other creatures may tap for effective use against the gods themselves.” (Herbert Brichto, The Names of God, pg. 60) The gods were all subordinate to something greater, something that determined their function and role in the world. The ancients had no name for this power, but it was described as “the watery stuff of nature” (Brichter, 60) that caused the gods to function in observable ways. The Mesopotamian text Enuma elish describes this as powerful cosmic matter that simply exists. Inside this eternal cosmic power, the gods are found emanating light and initiating creation of lesser gods and mortals from this existing cosmic matter. John Walton says that the ancients believed that the gods were “cosmically bound” to certain control attributes of this cosmic power that determined their destinies of function and role. (Walton, 63) Brichto says that the South Pacific islanders called this power that bound the gods, “mana,” and we might call this idea, “magic.” (Brichto, The Names of God, 60) The gods of the ancient world worked within a “magical” system that mortals couldn’t grasp, but believed they could influence through spells, incantation and divination.

There were two options open to an ancient person hoping to affect some control over the worldly things out of their control. They could turn to religious fervor to influence the gods (the natural world) through cultic ritual, prayers, gifts and devotion. Or, they could practice magic to influence the impersonal power that bound the gods. The problem with all of this was, the ancient person had no instructions on how to do this. How should they keep chaos at bay and ensure that nature worked for their benefit? This question is what motivated the ancient to seek the favor of the gods, and/or to go over the god’s head (so to speak), and seek control through magic.

This illustration is by Herbert Brichto in his book The Names of God, page 61.

It portrays the understanding of the cosmos in the ancient world in three spheres. The center sphere is the world around us that cycles through life and death, the mortal world. The second sphere surrounds the first and exerts control over the first sphere. It is the realm of nature, personified as the world of the gods. The third sphere encircles the first two realms and exerts control over them. This is the impersonal world of power, or magic, that controlled everything in the cosmos.

Genesis 1 was written to re-order this ancient understanding.

“When God began to create the heavens and the earth…” is how the Genesis creation account begins. This introductory statement up-ends the ancient cosmic understanding of magic and gods. It immediately refutes these two ancient notions: that there is an impersonal cosmic power which has always existed and from which all things have its being, and that the natural world is the actions of personal divinities. Instead, God -a named person- simply exists, and he makes the impersonal natural world from his words.

The first sphere is the same, encompassing the world of mortal creatures. But where the ancient person saw natural phenomena as specific divine persons to worship, the second sphere of Genesis is a natural world without personality or even names. If you notice, the author of Genesis does not name “the greater light” or “the lesser light,” most likely to further impersonalize the popular personalities of the Sun and Moon gods. These heavenly bodies are simply created objects given their directive to order the times and seasons by God. Humanity, not gods and goddesses, are given rule over the natural world.

The third sphere of the Genesis cosmos is the real game-changer. It not only names the ultimate power in the cosmos, it reveals that he is a person who has shared his likeness and dominion with humans. The ultimate power in the cosmos is not an impersonal watery mystery that it is impossible to know, but a powerful person who reveals himself and invites relationship.

Creation stories were well known in the ancient world, but the Genesis account is unique in its re-ordering of the cosmos with the God of Israel as the ultimate and supreme power over everything.

One thought on “Magic, gods and the re-ordering of Genesis 1”