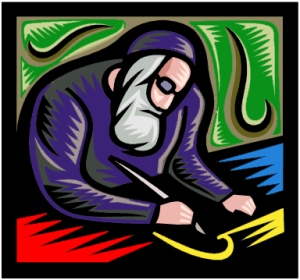 Conspiracy theories are heavy on intrigue and light on facts. I love intrigue and speculation. My husband has been my counterbalance, because he hates both. He is Mr. Rational to my Mrs. Conjecture. So, I’ve been ambivalent about posting this question, because it smacks of conspiracy. And Mr. Rational has trained me to suspect those.

So, lets look at the facts. Then, I’ll speculate on the intrigue.

Is our understanding of Scripture on gender skewed because historically, interpretation and commentary has  been written by men?

Again, my disclaimer: Neither gender is superior to the other; God judges character – heart motivation evidenced (to us) by persistent behavior.

By questioning the history of traditional Bible interpretations favoring men does not mean women would have done a better job than men. But, women would have brought different arguments to the gender discourse because they would also have been vested in the outcome. Instead, the men had no checks and balance by a female “opponent” when it came to questionable translation or interpretation. The school of Biblical study through the years (until the last century) has been dominated by men. Naturally, a one-sided bias would emerge.

Historically, has there been a tendency for male scholars to adjust Bible teaching to favor men?

Here is where I must enter the realm of speculation.  An in-depth look at this subject would make for marathon-like study. Alas, I have just decided to run. So, indulge me as I tickle your brains with two examples that lead me to suspect an affirmative answer to my question. These examples are from God’s Word to Women, by Katharine Bushnell.

Luther once said: “No gown worse becomes a woman than to be wise.” Luther only held the prevailing views of his day as regards women. Such men could not easily perceive when Scripture expressed a different thought on the subject. Proverbs 14:1 says, in Hebrew, “The wisdom of woman buildeth her house,” but not being able to appreciate the advantages of female education, men rendered it: “Every wise woman buildeth her house,” that is, the woman who devotes herself to housewifely duties is pronounced “wise.” But this is not the thought; rather, wisdom itself, in woman, will build her own (not her husband’s) house- elevate her to a place of honor. Every time there has been an opportunity for the use of option in translation, use has been made of that option, by this or that man of learning, to build up one sex and to depreciate the other, and so the result, through the ages, has been cumulative, and that without actual intention. (Katharine Bushnell, God’s Word to Women, para 619.)

More hints of gender bias can be found in a favored reference to women: “A virtuous woman, who can find? Her worth is more than rubies.” The Hebrew word that has been translated virtuous is chayil. It doesn’t mean pure or chaste, which is what you’d think by reading the English translation. It means strength, might, efficiency, wealth and army.  It’s sense is a display of valor, especially in warlike situations. It is a manly word. Elsewhere it is translated with variations of army, man of valor, riches, and power.  But in the three instances in Proverbs where it is used to describe a woman, most English translations deny the true meaning and alter its strength. Why? Try replacing virtuous with any of the true meanings. The implications might be hard for some men to swallow. A strong, efficient and warlike- a- man- of- valor- woman is worth more than rubies?

The Times, they are a changing.

Today, great lengths are being taken to re-evaluate our English translations with regard to gender bias. I applaud this work. I doubt the 2011 NIV will get it all right, but it does offer a course correction to the  prejudices against women of past cultures.

10 thoughts on “Has the “biblical” deck been stacked against women?”