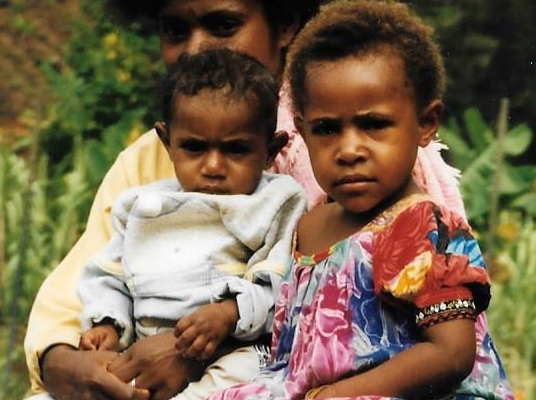 In 1995, when I was twenty,  I spent a few months in Papua New Guinea (PNG) delaying my college graduation from film school by six months. Can I say that huge life experiences happened because of this excursion? Nah. But I do have some fun stories, and hopefully I created a useful video for the missionaries I visited to recruit and publicize the work they were doing. Many thanks to my friend Bill Murray, who put days/weeks? into editing all my footage into a cohesive video while I was mending a broken heart.

10: Learning to cook fried rice with scrambled egg. This is really quite huge. #1) I was introduced to soy sauce. #2) Chinese restaurants were no longer needed. Marcia Ernst, a veteran missionary of PNG, taught me how to cook fried rice on the other side of the planet. There are hundreds of books written about men who live in alien cultures crossing the divide to reach others with good news (who can do all sorts of miraculous things with duct tape and gasoline) , but I experienced lessons from one of those WOMEN in cooking (with a spatula and frying pan, no less!). You just need oil, cooked rice, soy sauce, vegetables and eggs. Easy peasy. Until an earthquake strikes…

9: Life lessons in an earthquake. Now, we probably weren’t cooking in  the middle of this earthquake,  but that’s how I remember things. Books fell off  shelves. Furniture jolted. Rice was ruined. Reality shifted. The Earth was NOT. TO. BE. TRUSTED. A new acceptance of life was acknowledged as gravity evaporated and I was suddenly terribly alone. Even though surrounded by those who cared. I Could Die. Nothing Is Certain. What Do I Really Hope Will Happen To Me? A split second, and its over. THUNK!. I’m solid again. No longer weightless and floating. Back to rice, eggs and rooted existence. I was told “THAT” was no big deal. Normal. People live with different normals, don’t they? 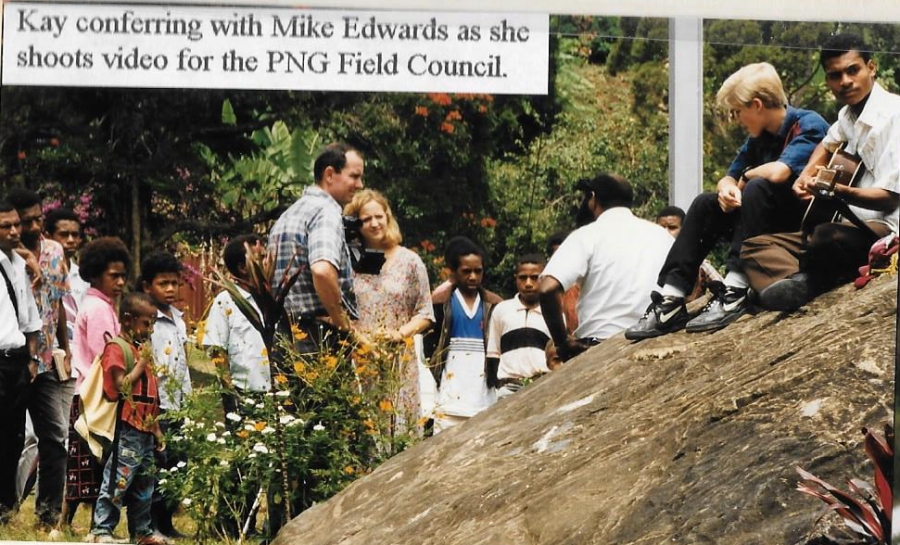 8: Tom Clancy predicts the future. I was sick. Fever, chills and sore throat. Later, I’d learn I was plagued with chronic tonsillitis. But now it was just the flu. I was loaned Debt of Honor to while away the hours of sickness. I remember not only reading the scene of the airplane-devastated Capitol building, but I remembered its horrifying likeness on the ACTUAL 9/11. I laid in bed for a week? And read, and listened to drums…

7. Drums can really sound satanic.  Especially when they mean it. I heard the beat calling to demons while I read the future. Literally, I heard the drums of distant tribes beating into the night. I was feverish and filled with fancy, and was told the tribal drums I heard that night were pagan and didn’t they sound satanic? They sounded hopeless and redundant. That is the same thing, I suppose.

6. I can squat like a native. As I looked into this, I learned its a “thing.” It even has a name: The Third World Squat. Its healthy. Cool. I can do it for long stretches of time, even in a skirt. It was in PNG that I learned that squatting is much more comfortable than standing for long stretches of waiting. I just wish I could do it more often in the States without the stares.

5. British ice cream is superior.  So are french fries and Knorr chicken soup.  Every so often my dad would drive me to the local missionary boarding school for something-or-other he had to do that was airplane related, and there I discovered Magnum bars. Magnum bars rocked my world in a land that I just could not enjoy eating the local cuisine. First of all, every breath smelled of smoke. Cooking fire smoke, as the locals had to cook this way. Hence, every bite tasted like smoke. I wish I could say I loved the food and could eat anything set before me. I can eat anything, once. But spending three months there, I just couldn’t do it anymore. As a result, my mother proved her love for me by making many bowls full of chicken soup and frying potatoes. for. every. meal. My dad treated me to many a drive to that little in-school grocer to visit the freezer full of Magnums. I learned a valuable lesson that trip for future travels… always look for Magnum bars when visiting foreign lands.

4. Cornrows are painful in more than 3 ways. I couldn’t pass up cheap braids and notoriety. What white girl has a head full of braids? Me!  Look close and you’ll see my crazy self. Three hours and the story of a lifetime for two Papua New Guinea ladies who braided and laughed and laughed at the novelty I was paying them to perpetrate: white girl cornrows… and blonde, no less! Stupid idea of mine. Those braid KILLED me all 14 hours home. I couldn’t sleep. My brain was being twisted. I couldn’t scratch. There was no space in my head full of gnarled torment. I survived a head full of braid for two days. The time it took to travel half the globe. Then, a movie later (Forest Gump for those interested)… upbraiding and releasing my sanity… I experienced another phenomena unknown to white hair… Afro. I had re-programmed my hair to kink. If only I understood how awesome that was! The lessons I learned in Papua New Guinea…kinky hair is beautiful. 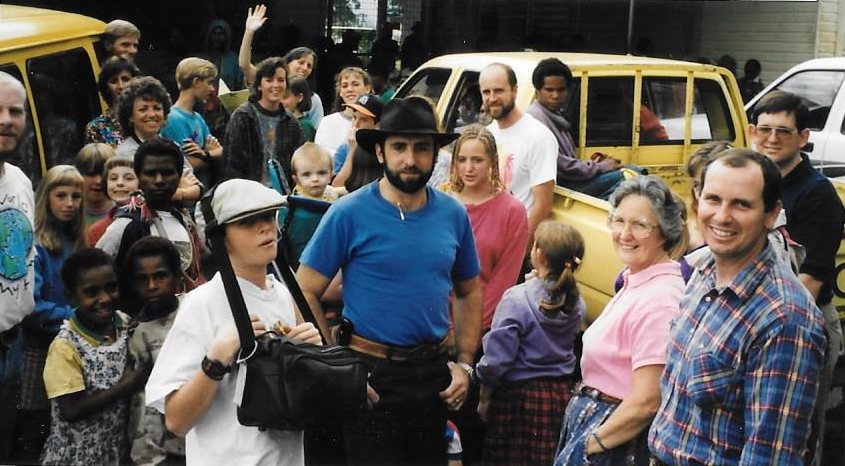 3. Fantasy Land is real: a world of waterfalls and hidden valleys. Much of my childhood was spent looking out an airplane window at the land below. If it wasn’t international travel, it was traveling the US in a Cessna. I’ve seen many landscapes – US farmland to the “broccoli” land of the Amazon jungle- but Papua New Guinea’s landscape was never repetitious. It was fantastical, unexpected and -as Anne would say – it gave “full scope to the imagination.” Behind every mountain was a waterfall, with birds catching the wind off the water, and every nook and cranny of the valleys filled with curious unknowns. I looked down from above in constant wonder. 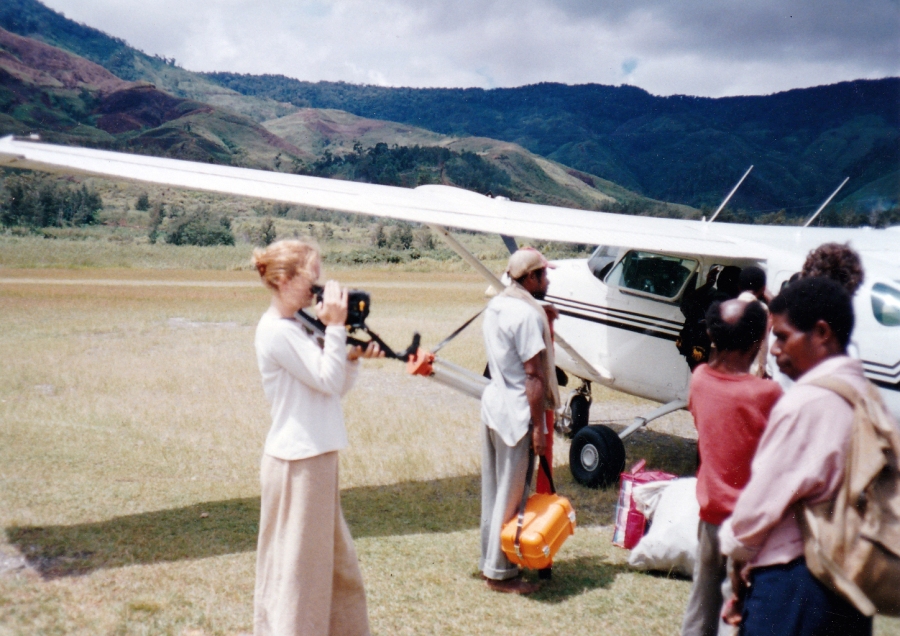 2. Beware of panicked bugs. Have an excruciating pain in your ear accompanied by scratching noises? It might be a BUG! Cockroaches fleeing insecticide that was dropped from airplanes over swaths of PNG countryside, run to any nook or cranny to escape the overhead death. I understand the country was periodically sprayed to control disease-spreading mosquitoes. Tunneling into an ear, the cockroach in this particular story only lived long enough to be squished by a pair of tweezers. The poor man whose ear housed the insect sought medical aid from the missionary medics, being unaware of what was causing him such pain. It was a sweet relief for him to have it pulled out and destroyed.  (I’m afraid my memory is faulty and I might confuse  PNG stories with Togolese stories. I remember that it was Lori Smith who told me this story as she works in the medical field, but it might have been a different nurse in Togo, West Africa. So apologies if I remembered this in the wrong location!)

1. Never wear your fanny pack backward. I learned how naive I was at age 20 in this story. Videotaping at the Goroka airport, my lens caught a distraught Australian woman – who happened to have cornrows, which is how I got the idea – turn and shout while she was standing at the ticket counter. Then she took off running, chasing a local out of the airport, down the street, around the bend and down a hill. We learned from folks around us anxious to tell the tale, that someone had grabbed the clasp of her fanny pack, which she had positioned so the clasp was in the back, zipper in front;  and in one motion unlocked it and vamoosed it out of there. I followed, camera rolling. I remember Rich, the twenty-something son of the Ernst’s who was sent to escort me around Goroka videotaping, saying something to me to the effect of, “wait…not a good idea.” But, I was intent on getting a crowd of PNG people filled with emotion. And the sight of this lady’s white head above the now-hundred black heads that came to her shoulder  was visually compelling. It just looked so good through the lens, I wanted more. Danger was not even on my radar. 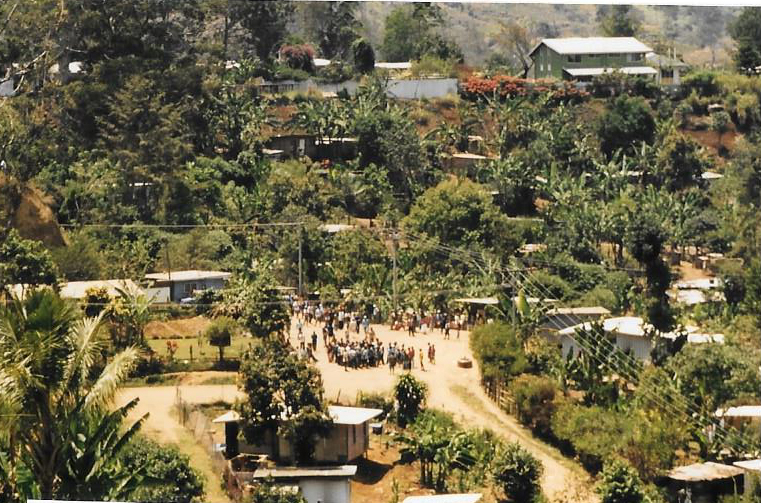 I didn’t listen to Rich and started to follow. He only let me go so far before he suggested we go to the edge of the hill because that would give me a great view of the action unfolding in the neighborhood below. Wasn’t that a tactful way to keep me away from the streets of a nasty section of town? I didn’t notice until we were leaving that he held a large rock ready in his hand. He grimaced as he dropped it, slapping his hands clean. Unlike me, this missionary son understood the dangers of PNG. What I enjoyed as a great event unfolding for my camera, he appreciated as a “blonde” opportunity for any unscrupulous PNGer with crooked ideas. So this memory could be titled: Never wear your fanny pack backward and always carry a big rock. Thanks for the protection Rich.

If any of the wonderful missionaries I stayed with are reading this memoir of their home, thank you for welcoming me and giving me the opportunity to craft a story of your work on video. I especially am thankful for the picture book of PNG and the thank you letter you sent as it helps my faulty memory retain integrity. Those who jump out in my memory: Ernst, Tobias, Smiths, Aholts, Teachouts, and Edwards