Modern readers of the New Testament naturally impose familiar surroundings when reading the ancient words of the Bible. Think about it. When you read that Paul sent a letter to a church, do you imagine a group of people sitting in neat rows listening to a reader up on a platform? This is our idea of a church meeting. The reality of the first century church gatherings is worlds apart.

Immediately after the gift of the Holy Spirit at Pentecost, the Jewish believers in Jesus began to meet in homes. In the house environment, they ate together and also taught Jesus’ words. Paul began each work in a new city by visiting the synagogue, but in every case, the gathering of believers ended up in someone’s personal abode.

And day by day, attending the temple together and breaking bread in their homes… Acts 2:46

And every day, in the temple and from house to house, they did not cease teaching and preaching Jesus as the Christ. Acts 5:42

…Saul was ravaging the church, and entering house after house, he dragged off men and women … Acts 8:3

… and teaching you in public and from house to house… Acts 20:20

Greet also the church in their house. Romans 16:5

Aquila and Prisca, together with the church in their house… 1 Corinthians 16:19

… Apphia our sister and Archippus our fellow soldier, and the church in your house… Philemon 1:2

…and to Nympha and the church in her house. Colossians 4:15 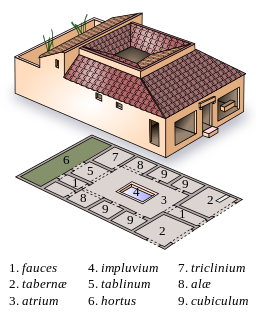 Now lets tackle our perceptions of what an ancient first century house was like. Much of our understanding of Roman houses comes from upper-class Pompeii and Herculaneum. A Roman domus, even the modest ones, would have rooms centered around a central courtyard. Simple houses in Palestine tended to have one central room with an open courtyard in front, and an extra “room” on the roof.

Based on this, consider the physical space of the early house churches. Some were in upper class villas, where there was ample space to divide the service along traditional gender lines, but in the vast majority of domestic structures, there was no room for segregation. Women and men worshiped physically together in the same spaces. Children and animals would be present either physically or within earshot.

Not only was the layout and architecture different from ours, the customs around the house and home life contrast with our modern practices. The home was the domain of women, not men. We see glimpses of this ancient mindset in Proverbs 31, where the wife governs the household affairs. Socrates mentions that the husband and wife are partners in the Roman estate: the wife at home and the husband in public. Philo states that a wife has full authority at home. Hospitality is a key virtue for women in the early church. In 1 Timothy 5:14, Paul instructs the married women to be the master of their own house. A wife with good management skills was prized in Roman times. The presence of wives, mothers and widows in the house churches enabled the first churches to blend the traditional female sphere of home with the traditionally male public sphere.

“To step into a Christian house church was to step into the women’s world.” (1)

The locale of the church inside of homes led Pliny the Younger and Celsus to criticize the Christians. Because the home is under the rule of women,  they considered Christianity an assault on Roman masculinity.

In is notable that Christian women did not exercise unique leadership roles in the early church, but they reflected the social and cultural shift of a woman’s place in this time. At the time of the early church, a woman’s legal and social status was in flux in Roman secular society. Women were beginning to recline at public functions and own property and businesses. These cultural shifts coincide with the rise of Christianity, and might have been amplified because of the equality of the gospel. Some women in the first century were listed as head of households. Some even held civic political appointments. Women were engaged in business and had funds to disperse.

Mary in Acts 12:12-17, Lydia in Acts 16, and Nympha in Colossians 4 all managed house churches.  1 Corinthians 1:11 reveals that Chloe is either the principal of a household or has an extended network of clients under her. Women would have presided over meals – the Love feast as well.  It was normal procedure for the one who owned the house to select the menu, facilitate conversation and provide entertainment.  Women in the early church were naturally a part of its leadership because the home was their sphere of influence.

So, next time you start reading through Acts or one of the epistles, employ your new understanding and imagine the church the way it would have been – at home.

This article is a brief summary of the ideas found in: A Woman’s Place by Carolyn Osiek, Margaret MacDonald with Janel Tulloch,

4 thoughts on “The Women’s World of the House Church”